74-year-old woman presents with a third occurrence of poorly differentiated carcinoma of the left cheek. Her history began in March 2015 with a 1 cm left cheek dermal poorly differentiated carcinoma. Histologic differential diagnosis included metatypical basal cell carcinoma, adnexal BCC, or metastatic epidermoid origin carcinoma. CT/PET scan was negative at the time. She was treated with Mohs excision and closure. In May 2016,  the patient presented with a similar 1 cm nodule in the left anterior parotid. She was treated with superficial parotidectomy with facial nerve dissection in June 2016 obtaining clear margins. Radiation Oncology consultation was obtained, but treatment was deferred due to a lack of clarity of primary tumor.

The last cancer occurrence appeared in mid 2017 with delayed presentation for treatment due to other health issues. She was treated with parotid tumor debulking with grossly positive margins on the facial nerve but full preservation of nerve function on 12-13-17. 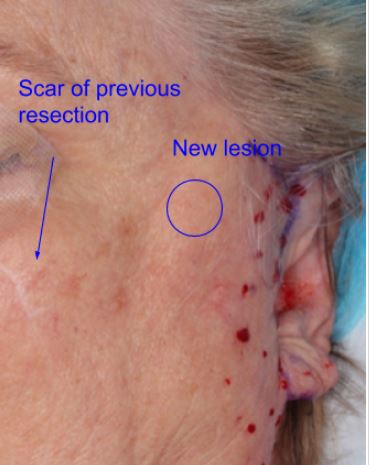 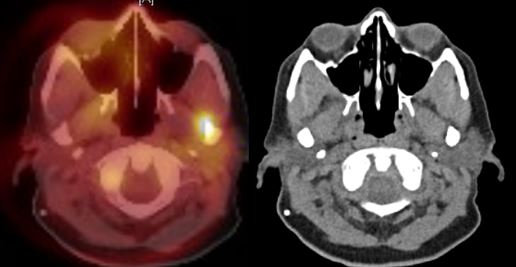 The likely origin of this tumor is the initial cheek lesion. It metastasized 4 cm to the adjacent parotid a year later, and one year after that metastasized another 4 cm to the tail of parotid and overlying soft tissue. Surgical treatment of this deeply invading carcinoma presented a dilemma of leaving the tumor behind or resecting the facial nerve. Over the last 25 years, multiple studies have supported the organ and nerve sparing approach to invasive carcinomas. Treatment with chemotherapy and radiation achieves similar cures as radical surgery with radiation.

This leaves surgery as a debulking modality in these highly invasive cancers. Debulking serves an important purpose of facilitating the effectiveness of radiation therapy. The rationale behind that assertion is as follows. Large tumors have unstable blood supplies that would be impacted by radiation induced tumor melting. The compromise of blood flow by radiation to an internal portion of a thick tumor would create a hypoxic area of radiation resistant tumor cells. Radiosensitivity requires robust metabolic activity and cell division. Hypoxic hypometabolic cells are radiation resistant.  Debulking surgery serves to avoid that effect.

This radiation-induced tumor ischemia is what also creates indications for radical surgery. For example in this patient, if the mandible was invaded and the tumor did not shrink with neoadjuvant chemotherapy, then success of radiation in the bone would be limited. Radical bone resection would be indicated. 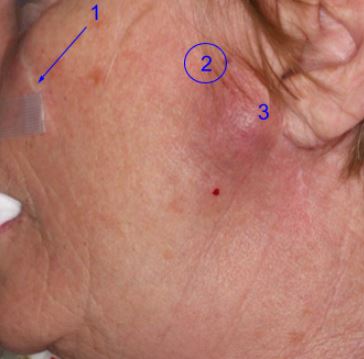