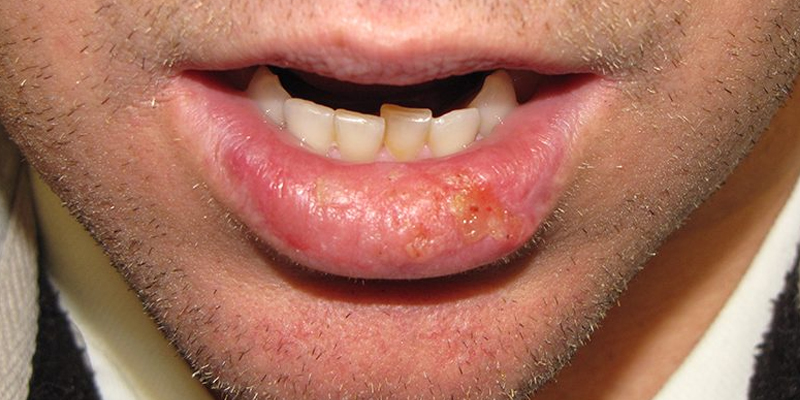 The vast majority of cutaneous squamous cell carcinomas (SCC) have only a limited local impact on the area of involvement. However, some of these SCC’s have an increased risk of recurrence, regional lymphatic metastases, and distant spread. There are several criteria defining high risk SCC's.

Tumor size > 2cm has been shown to carry increased risk of regional metastases, as high as 30% in some studies. The size is not the strongest predictor of metastases given other factors.

Tumor thickness, however, has been shown to be a strong predictor of both recurrence and regional spread. Tumors ≤ 2mm have negligible risk, while tumors ≥ 5mm have a 12% risk of recurrence and up to 45% risk of lymph node metastases. Invasion beyond subcutaneous tissues, for example, into lip muscle or parotid are independent high risk factors.

Several other features are associated with high risk behavior – lymphovascular invasion and desmoplastic growth. Infiltrative features specifically has been shown to have up to 23% risk of lymph node metastases and 27% risk of recurrence. More specifically, certain histologic features are ominous – small tumor nests, infiltrative strands, and single cell infiltration. Gross behavioral features such as recurrence or satellite lesions are well known signs of aggressive tumor behavior. One often cited feature of high risk - histologic differentiation - is actually a weak predictor with conflicting evidence on both sides.

Host factors must not be overlooked such as chronic lymphocytic leukemia and its immunosuppression. Organ transplant recipients are also well-known victims of aggressive SCC behavior. However, it has been the older immunosuppressants such as cyclosporine causing higher rate of skin cancers. The newer drugs such as sirolimus (Rapamune) cause significantly fewer carcinomas.

Understanding what factors to consider in identifying high risk SCC of the face is the first step. Identifying those factors prior to treatment is the critical. That will be covered in upcoming articles.

HISTORY A 53-year-old man presented with an approximately 10-year history of right upper eyelid “psoriasis.” He was treated with alclometasone dipropionate 0.05% ointment which helped with redness but flaking was still present. Trial of Protopic 0.1% ointment on 1/23/20 with minimal relief. Punch biopsy of the right upper eyelid on 5/19/21 showed inflamed AK. Area…
Read More →

HISTORY  An 86-year-old man on hemodialysis with multiple medical problems and on warfarin presented with two carcinomas of the nasal tip: BCC of the left nasal tip and SCC of the right nasal tip. The ulceration of the right SCC exposed the alar cartilage. Patient completed six (6) 5-fluorouracil injections over a 5-week period. Complete…
Read More →

HISTORY A 58-year-old kidney transplant recipient presented with a 6-month history of squamous cell carcinoma of the left scalp. This large lesion was adjacent to the scar of a previous carcinoma excision in 2014. Patient is on sirolimus for his kidney transplant performed in 1984. He has had multiple BCCs and SCCs of scalp, back,…
Read More →
PATIENT WEBSITE
WHY CHOOSE SCARS CENTER
PATIENT CASE STUDIES