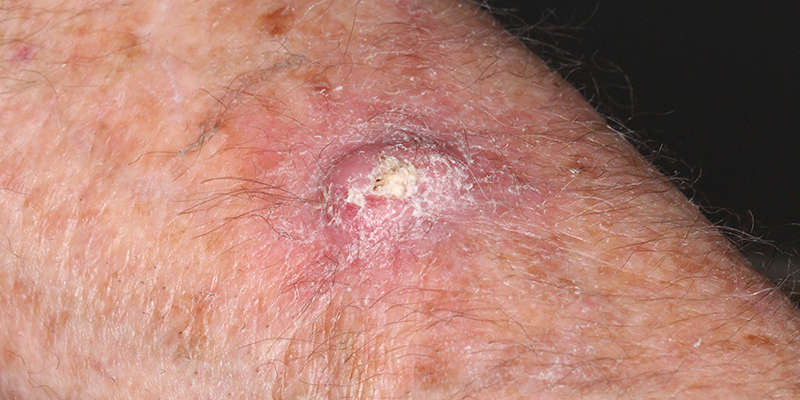 Keratoacanthoma has been described as a benign lesion that spontaneously involutes and as a variant of squamous cell carcinoma that rarely can behave aggressively. We present a case of a keratoacanthoma-like lesion in an elderly patient that recurs invading deeply into vital structures.

The diagnosis of a classic keratoacanthoma (KA) is based on clinical and histologic findings. Clinically, the classic KA appears as a nodule with a central keratin-filled crater. It has three phases of behavior:

KA has distinct histological features of keratin-filled crater lined by a proliferating squamous epithelium. Shave or incisional punch biopsies are usually inadequate to diagnose keratoacanthoma, and the definite diagnosis can only be established after tumor excision, based on the histological findings.

Treatment of classic keratoacanthomas can be conservative given their self-limiting course and has included curettage and intralesional methotrexate.

The catch with KA is the association with squamous cell carcinoma (SCC) and occasional aggressive behavior. 16.7% of KA are SCC. This speaks to the significant overlap in the clinical and histological appearance of the two, which can result in misdiagnosis of SCC as KA. In addition, KA may coexist with a SCC in the same lesion, as the more aggressive cell line eventually transforms the tumor into an aggressive lesion. The development of SCC in a KA has been reported in 5.7% of KA’s. In patients older than 90 years, the transformation incidence was found to be almost 14%.

Treatment of keratoacanthomas is surgery. Mohs surgery is the standard with a reported recurrence rate of 2.4%. Radiation including orthovoltage has been shown to be highly effective as well.

HISTORY A 53-year-old man presented with an approximately 10-year history of right upper eyelid “psoriasis.” He was treated with alclometasone dipropionate 0.05% ointment which helped with redness but flaking was still present. Trial of Protopic 0.1% ointment on 1/23/20 with minimal relief. Punch biopsy of the right upper eyelid on 5/19/21 showed inflamed AK. Area…
Read More →

HISTORY  An 86-year-old man on hemodialysis with multiple medical problems and on warfarin presented with two carcinomas of the nasal tip: BCC of the left nasal tip and SCC of the right nasal tip. The ulceration of the right SCC exposed the alar cartilage. Patient completed six (6) 5-fluorouracil injections over a 5-week period. Complete…
Read More →

HISTORY A 58-year-old kidney transplant recipient presented with a 6-month history of squamous cell carcinoma of the left scalp. This large lesion was adjacent to the scar of a previous carcinoma excision in 2014. Patient is on sirolimus for his kidney transplant performed in 1984. He has had multiple BCCs and SCCs of scalp, back,…
Read More →
PATIENT WEBSITE
WHY CHOOSE SCARS CENTER
PATIENT CASE STUDIES