81-year-old man presents with 7-month history of two nasal tip and right nasal ala BCC’s. All three lesions were treated with 2 adjoining SRT fields. The course began 1-8-18 and completed by 1-26-18 after 15 treatments.

Three basal cell carcinomas of the nasal tip and ala. 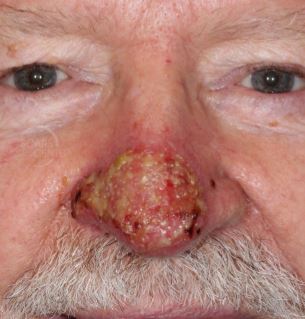 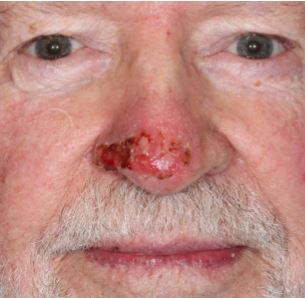 2.5 weeks after completion of radiation – still with superficial erosions.

This patient represents an excellent candidate for radiation therapy. Electron beam radiation therapy can be used with a conforming bolus to even out the radiation to the complex contour. In this patient we chose to use two fields of superficial radiotherapy with a 50 kvp beam in an office setting. Three week course with 5 treatments per week was administered. Weeping superficial erosions developed 1 week after completion. The skin epithelialized completely by 3 1/2 weeks.

Final cosmetic outcome with radiation therapy can be superior to that of surgery in complex nasal tip carcinomas. Superficial ulceration can be minimized by extending the radiation course to 5 weeks with smaller fractions.