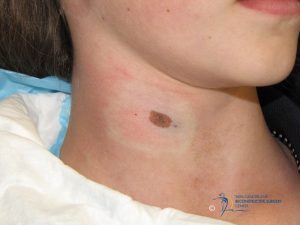 A 12 year old with a 10 x 7 mm pigmented nevus present since infancy undergoes excisional biopsy of the nevus for cosmetic and diagnostic purposes. Pathology evaluation finds this to be a compound nevus with  moderate atypia and partial margin involvement. Pathologist recommends re-excision with 2 mm margins. Do we chase the margins as the pathologist recommends or do nothing more?

This scenario is more often seen with shave biopsies where atypical nevus with involved margins is identified, and then additional excision with 2 mm margins is performed. In many of these cases, the entire visible nevus was removed with the first biopsy. Is this the setting where “completion” of excision is indicated?

Before embarking on proving the fallacy of chasing margins of dysplastic nevi, certain caveats exist. Sampling biopsy of a melanocytic lesion, such as incisional biopsy or punch biopsy, is prone to sampling error. Barr (Arch Derm, 2008) demonstrated a 35% heterogeneity rate of atypia within atypical nevi. Thus, complete excision of dysplastic / atypical nevi is recommended in order to avoid missing more severe lesions such as melanoma. In fact, if melanoma is suspected, complete excision with 2 mm margins is clearly indicated.

Where the standard of care should be questioned is in the treatment of benign appearing or even clinically dysplactic nevi proven to be histologically dysplastic. Clinically dysplastic nevus (atypical mole) is defined by the ABCDE criteria: asymmetry, border irregularity, color variability, diameter >6mm, and evolution / change.  The number of these features within a single nevus predicts the likelihood of its histologic atypia: of nevi with 1 feature of ABCD – 7% are histologically dysplastic, with 2 features of ABCD – 23% are dysplastic, and with 3 features – 62% are dysplastic. (Grob, Br J Dermatol 1988;118:745­-52.) What is more interesting is that 30% of normal moles have at least minimal histologic atypia. (Klein, J Am Acad Dermatol 1990;22:275­-82.) Put this together with the fact that 10% of population will have dysplastic nevi, and 20% of melanomas develop in contiguity with a dysplastic nevus, the following interesting conclusion can be drawn. Only 1 in 10,000 dysplastic nevi per year will progress to melanoma.

“These estimates underscore the argument that prophylactic excision  of dysplastic nevi is unlikely to be cost effective and might, in addition, give patients a false sense of security, since an increased risk of melanoma may remain after these nevi have been removed.”  (Naeyert, N Engl J Med 2003;349:2233-40.) She further states that “prophylactic excision is not warranted for lesions diagnosed clinically as dysplastic nevi, since the probability that a single lesion will develop into melanoma is very low and since excision does not clearly reduce the overall risk of melanoma.” However, excision with 2 mm margins is always indicated where melanoma is suspected by a clinician’s inspection. Another exception is in patients with a personal and familial history of melanomas, where the risk of melanomas is much higher, and biopsies should be done more liberally.

So, what then of the positive margins when the dysplastic / atypical nevus is completely excised clinically? The key to the answer lies in complete clinical excision – where the preponderance of sampling error is eliminated. There is simply no evidence to suggest that these lesions need to be treated as a melanoma with chasing of margins. Another caveat is if a superficial shave biopsy leaves the assessment of depth of atypia in question and,  thus, a possibility of melanoma, then complete excision is indicated.  This is a rare scenario.

It stands to reason that chasing margins with additional excisions is not supported by available evidence.  Despite the pathologist’s recommendation of 2mm additional margins excision for our patient, observation is the more appropriate treatment.

Much has also been written regarding grade of atypia – mild, moderate, or severe. There is little epidemiological evidence of to suggest that the grade of atypia should change the treatment plan. So, perhaps it is time to rethink the chasing of margins in atypical nevi and spare our patients from more procedures and larger scars.