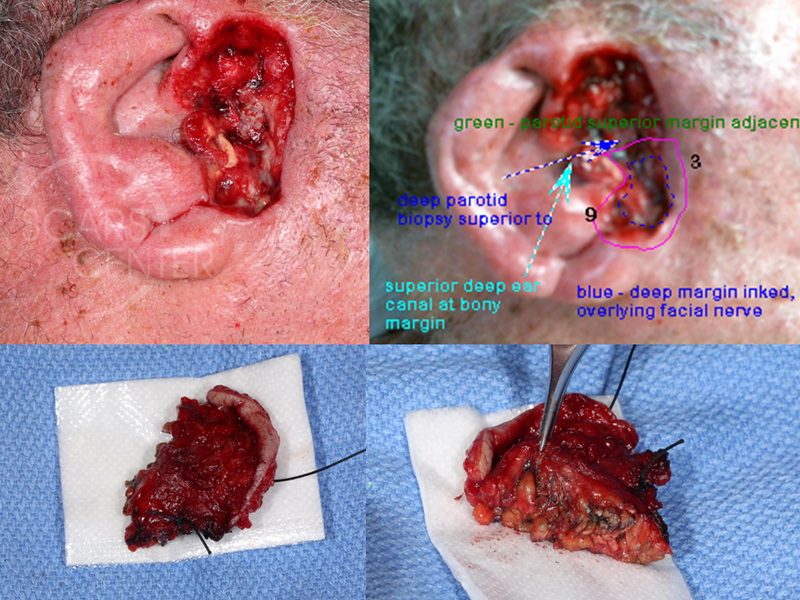 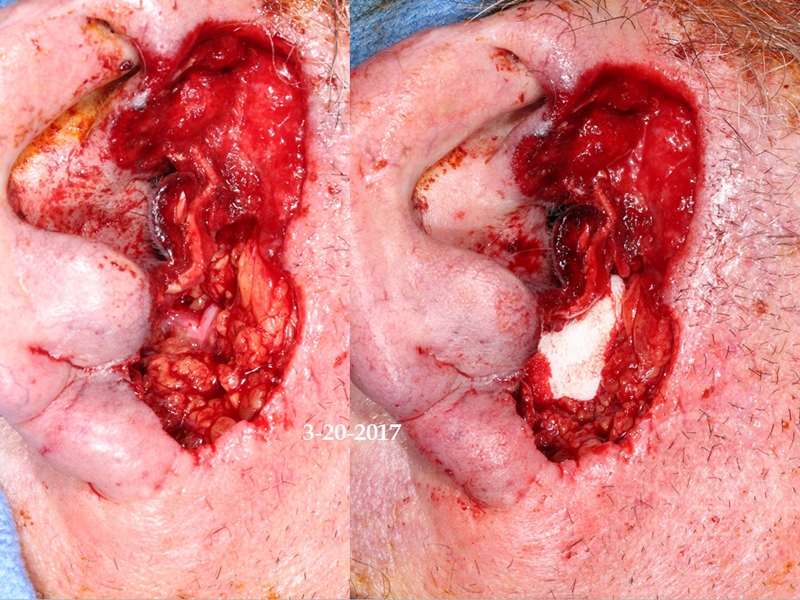 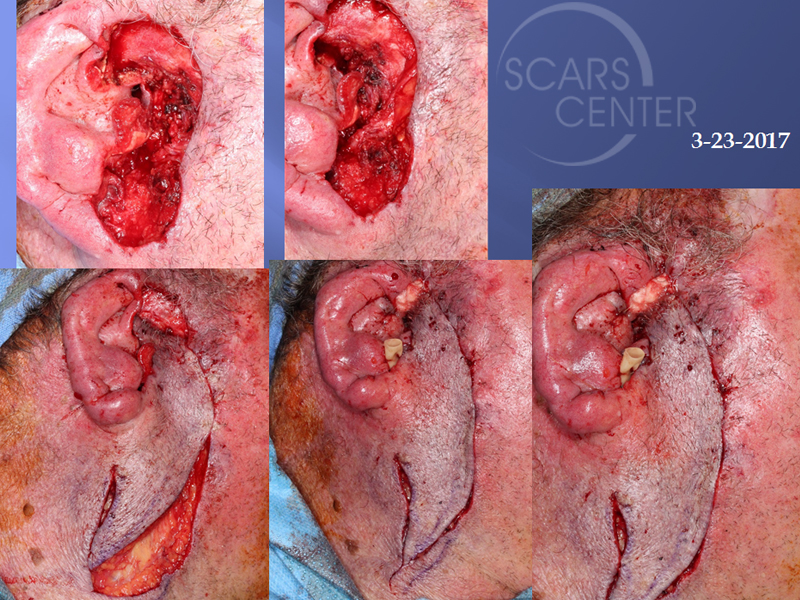 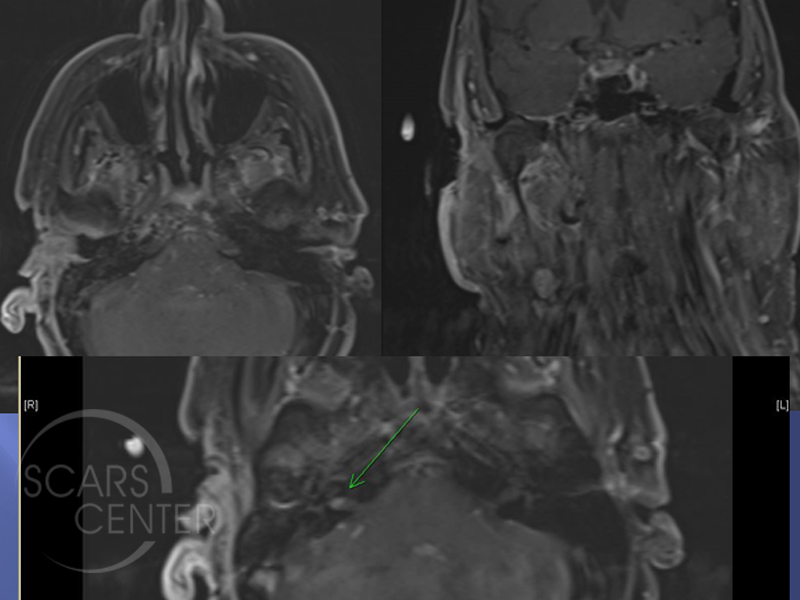 79 year old man presented in 3/2017 with basal cell carcinoma of the right ear involving the parotid and the tragal cartilage. 3 levels of Mohs were done without clear margins. Mapping biopsies were performed on 3/20/17 showing metatypical basal cell carcinoma with perineural invasion in the parotid but not the facial nerve. On 3/23/17, the patient underwent a superficial parotidectomy with facial nerve dissection, anterior ear canal resection, and wide local resection of soft tissues to the deep temporalis muscle and TMJ fascia.  Infiltrative and metatypical basal cell carcinoma was found at the deep margins of the TMJ fascia.

This is the case of 79-year-old man, who presented with deeply invasive basosquamous cell carcinoma of the right cheek and the parotid gland. Mohs excision after three levels was able to clear cutaneous margins, but found the tumor invading deeply into the parotid gland. The patient presents for evaluation and additional treatment of this deeply invasive basosquamous cell carcinoma. The patient has been evaluated with an MRI, which showed no invasion into the infratemporal fossa. On the MRI, you can see the area of tumor invasion in the area of the parotid.  The tumor actually is visible on the MRI, on the T1 image, and appears to be extending to the condyle of the mandible or at least the fascia overlying the temporomandibular joint. However, facial nerve involvement could not be ruled out. As a result prior to undergoing definitive resection, the patient underwent staging biopsies. This included facial nerve dissection to determine the extent of the nerve involvement. Final pathology revealed the main trunk and both major divisions of the facial nerve free of both gross tumor and histologically involved tumor. The deeply invasive tumor was still present cephalad to the facial nerve and was not resected pending completion of workup and surgical planning. The tumor grossly involved the temporal branch of the facial nerve.

This case represents the complexity of carcinomas invading the parotid gland. Main modality of treatment is either surgical or with radiation on these cases. However, if the tumor grossly involves the facial nerve, then the necessary treatment would require facial nerve resection in order to achieve the surgical cure. With basal cell carcinomas, this may not be an acceptable scenario. Facial nerve resection is severely functionally impairing and emotionally upsetting. Therefore, preoperative treatment planning is critical in these patients.

This patient is unusual in that we have chosen to perform a facial nerve dissection in order to define its invasion prior to definitive treatment. This helps prepare the patient for the comprehensive surgery and to prepare the surgeon for the possible reconstruction required. Although, the main trunk and the two main divisions of the facial nerve were found to be free of cancer, gross involvement of the tumor was in the area of the temporal branch of the facial nerve. As a result, the patient was prepared for resection of that branch. This is not an essential nerve and would only impact the movement of the forehead on that side. The wound was not closed, but the facial nerve area was packed with Gelfoam to separate the gross tumor above that from the exposed facial nerve below.

Unfortunately, the pathology revealed positive margins on the deep portion of the resection corresponding with the area on the MRI overlying the temporomandibular joint.

Reconstruction of the patient was performed with inferiorly-based SMAS fasciocutaneous island flap.  The inferior portion of the parotid gland was left attached to the SMAS and detached from the deep fascial attachments in order to advance it into the area of tumor resection for reconstructive purposes.  Great care was taken not to injure the facial nerves as the parotid was being separated from its facial nerve attachments while the facial nerves were coursing through it.

At the conference, we discussed the nature of this carcinoma with its deep invasion, perineural invasion and margins extending to the temporomandibular joint fascia.  Microscopic clearance of this cancer would not be defined as cure.  Therefore, the choice this patient faces is a massive resection including lateral temporal bone resection, resection of the condyle of the mandible and the posterior portion of zygomatic arch.  This resection would also extend into the infratemporal fossa.  This is a high risk surgery with a risk of significant blood loss and requiring reconstruction with microvascular free flap (most likely radial forearm free flap).  Even in that case, cure would not be guaranteed without additional radiation therapy.  As a result, the recommendation was unanimous that the best subsequent treatment for this patient is radiation therapy.  The inner ear of this patient would be affected and would result in hearing loss.  Additionally, the temporomandibular joint inflammation would cause some ankylosis of the TMJ with mild-to-moderate impact on jaw movement.

Subsequent follow up of this patient would require serial MRIs every three to six months to follow evidence of possible deep recurrence.  This would be a challenge given the significant MRI changes due to forthcoming radiation.  Follow up with CT-PET scan could be useful; however, this carcinoma may not have significant metabolic activity and volume of recurrence to be detectable on a PET scan.  A 4 mm diameter hypermetabolic tumor is required for the threshold detection of a CT-PET scan.