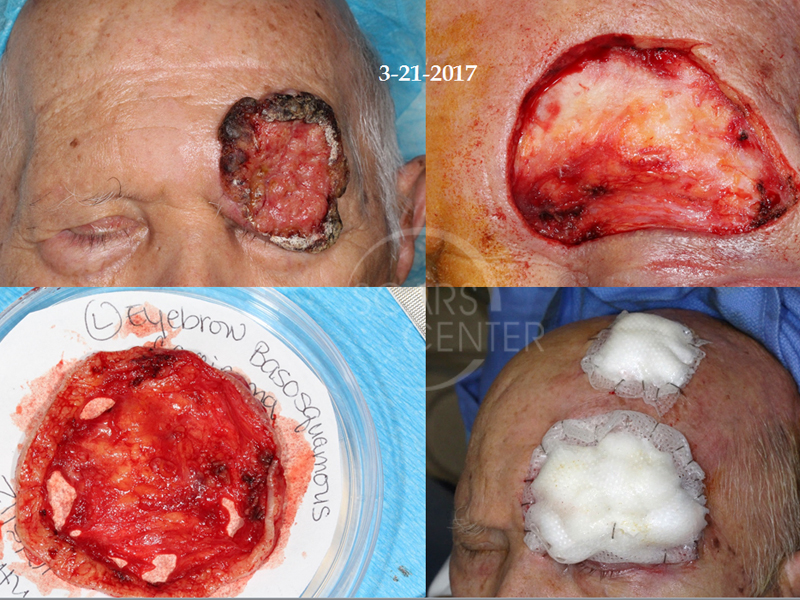 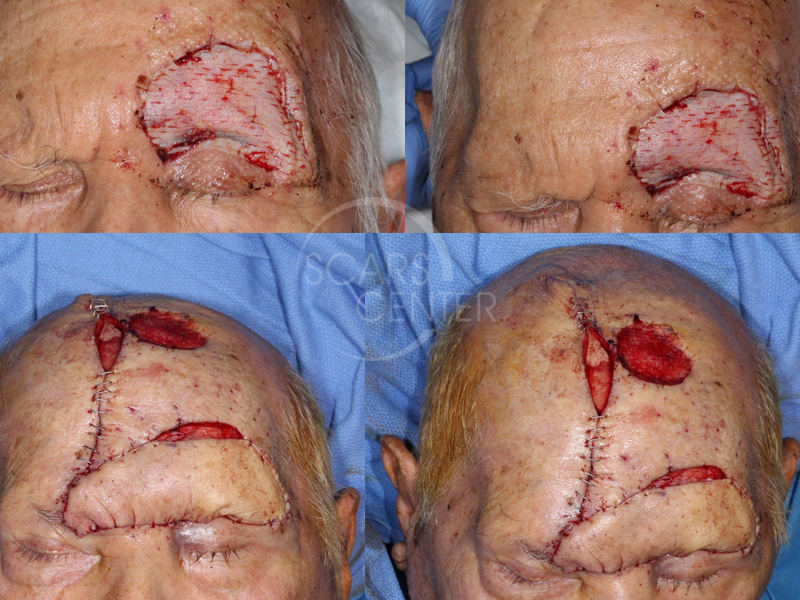 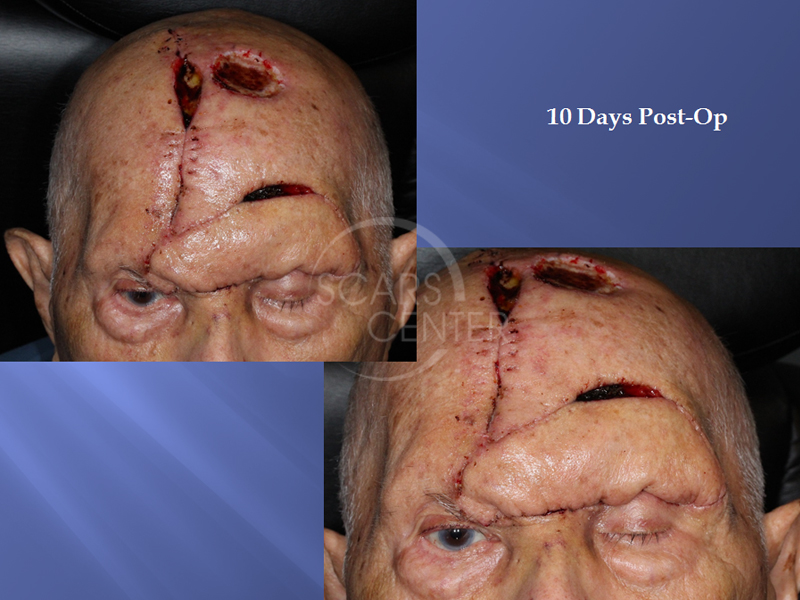 104 year old man presented in 2/2017 with basal cell carcinoma of the left frontal scalp and basosquamous carcinoma of the left eyebrow. On 3/21/2017 the patient underwent a wide local excision and Mohs margin excision of orbit and forehead. At the time he also had Mohs excision of the scalp forehead basal cell carcinoma with clear margins. The excision pathology showed squamous cell carcinoma (maximum tumor size of approximately 5.0cm, and 1.7cm in thickness) with perineural invasion within the main tumor mass. Forehead reconstruction with a flap and skin graft was completed on 3/28/2017.

This is a 104-year-old man, the oldest patient presented so far in our conference with a squamous cell carcinoma of the left forehead, eyebrow and upper eyelid.  The tumor appeared to be relatively mobile over the eyelid itself suggesting possibility of clear margin resection.  Given this patient’s age, comprehensive resection with orbital exenteration and subsequent radiation was not an option for this patient.  As a result, the surgery was undertaken with the hopes of clearing tumor from the area superficial to the orbital septum.  The initial operation was the resection done separately from the subsequent operation of reconstruction.  This was done to limit the length of anesthetic for the patient.

Our initial operation was the classic combined SCARS center procedure where the wide local resection was combined with Mohs level resection of the final margin.  Fortunately, the Mohs level resection as you can see in the adjacent diagram found clear margins throughout the specimen.  This final layer of resection was off of the orbital septum and the periosteum of the forehead.  The initial closure was done with a porcine xenograft as a biological dressing.  In the adjacent diagram you can see the porcine xenograft one week later providing excellent clean biological dressing for this patient.  The patient was able to continue with daily hygiene and showering.  At the second procedure, we utilized a paramedian forehead myocutaneous transposition flap over the area of the defect.  The skin graft was not an option due to the exposure of the orbital septum and loss of the upper eyelid and eyebrow.  The reason behind that is skin graft is associated with significant contraction.  Therefore, skin graft reconstruction alone would have caused contraction of the upper eyelid skin to the supraorbital bony rim causing a cicatricial lid retraction.  The flap was designed in such a way as to push the upper eyelid down further with its mass effect.  The forehead flap itself was pushed into the area of the orbital septum to provide support to the upper eyelid and limit the area of contraction.  That is why some of the forehead flap was not secured superiorly leaving a small area to heal by secondary intention as you can see in the photograph.

Incidentally, the patient had treatment of another carcinoma of his forehead at the time of the first procedure.  This area will be allowed to heal by secondary intention with a porcine xenograft.

In the postoperative photograph 10 days later, significant ptosis of the left upper eyelid is present.  The patient is able to minimally elevate the left upper eyelid suggesting that no neuromuscular injuries occurred.  However, this is an expected outcome given the long term mass effect of the tumor on the upper eyelid, which physically stretches the levator palpebrae superioris muscle of the lid.  This patient could be a candidate in one to two months for possible ptosis repair if the levator function does not improve.

Radiation therapy for this patient is not an option, because of the proximity of the eye.  Radiating superior orbit is associated with significant complications to the globe with subsequent globe pain and loss of vision.  These symptoms will force an orbital exenteration for symptom control.  As a result, observation is the only postoperative management plan for this patient.