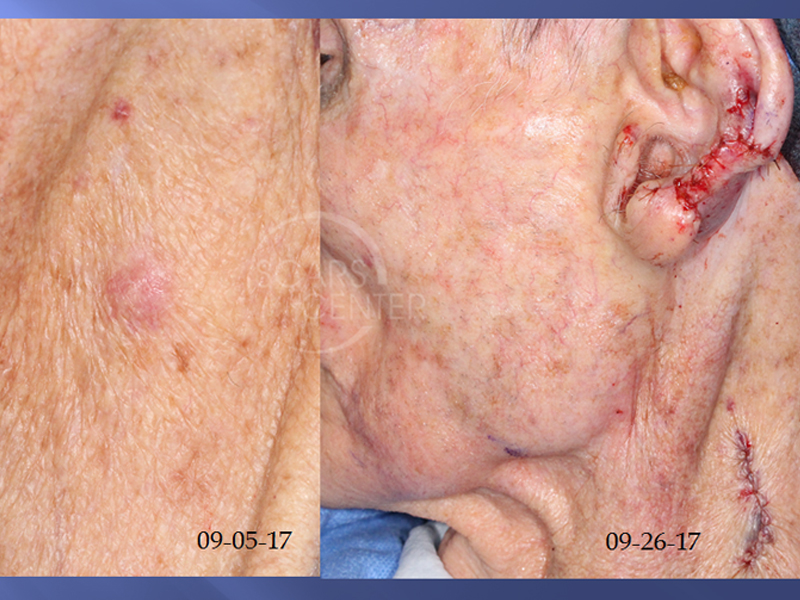 This spindle cell neoplasm can have benign behavior or be highly malignant despite having an identical histologic appearance. The depth of invasion defines the tumor.

Atypical fibroxanthoma (AFX) is a superficial lesion that is treated with local excision, Mohs excision, or even C&D.
Pleomorphic dermal sarcoma invades the dermis and can be treated with wide local resection.
Undifferentiated pleomorphic dermal sarcoma invades into subcutaneous tissues such as fat or muscle fascia and is associated with hematogenous and lymphatic spread. It is treated with wide local resection and radiation. This subtype is what has been known previously as malignant fibrous histiocytoma (MFH) of the skin. MFH terminology is being abandoned in favor of pleomorphic sarcoma, which is a class of fibrohistiocytic tumors.

An interesting historical fact shared by Dr Ronald Barr is the saying the AFX is “:too malignant to be malignant”. In other words, the ominous histologic features of the AFX belie its benign clinical behavior.

Our patient underwent wider local resection of the neck tumor resecting sternocleidomastoid fascia, the great auricular nerve, and investing neck fascia. Local radiation therapy should be considered to minimize the risk of recurrence.