The patient’s history began a year prior, in 2016, with 5-FU treatment of a left nasal ala. The left ala lesion was biopsied as SCC and treated with curettage at the time of Mohs surgery of left nasal tip on 2-9-2017. 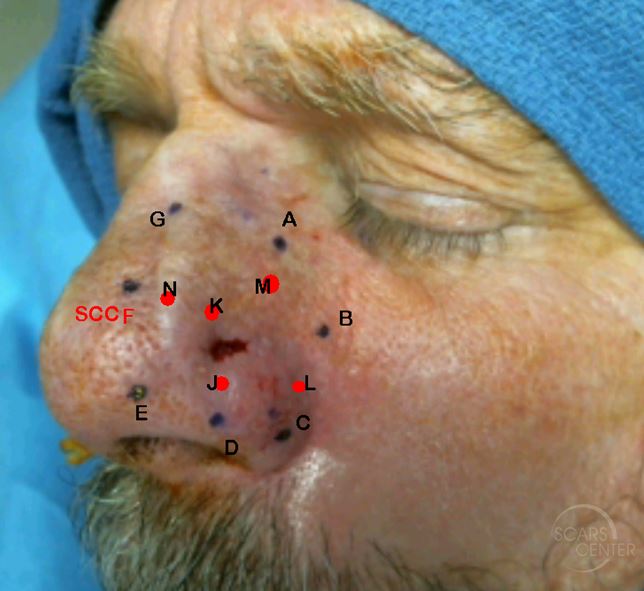 Early detection of skin cancer recurrence can be elusive. This case represents a recurrence with classic signs that were not recognized as recurrence initially. The patient reported itching of the area of reconstruction starting 5 months post-operatively. Itching is a sign of nerve regeneration and a normal symptom of healing after flap reconstruction. Whether itching was a sign of carcinoma recurring under the flap will remain a mystery. But new sensory symptoms such as itching or tingling in a well-healed surgical area may represent cancer recurrence.

Drainage from the incision months after reconstruction is almost always a deep suture reaction. The nose is particularly prone to draining sutures due to its deep sebaceous glands. Bacterial contamination of a foreign body, such as a non-dissolved suture knot, will result in a small suture abscess and drainage and extrusion. Suture infection and drainage usually occurs 3 weeks to 6 weeks post-operatively. Rarely, a non-dissolved stitch contamination can occur several months later. Drainage from a well healed scar 10 months post-operatively should be evaluated histologically for cancer recurrence. In our patient, drainage of cellular debris and pus was the presenting sign.

Finally, when our patient presented with clear rhinorrhea 10 months after surgery, it was dismissed as a common sign of aging nose – vasomotor rhinitis. The nose is particularly sensitive to external stimuli. This sign may have been due to cancer recurrence with its sensory nerve involvement, triggering vasomotor rhinorrhea.

Although this recurrence may have been picked up earlier, the symptoms and signs were initially subtle and close follow up was a reasonable course of action. But these symptoms are worthy of analysis and summary: itching starting at 5 months, persistent fullness of the flap at 8 months, minimal wound drainage and clear rhinorrhea at 10 months, and, finally, obvious drainage at 11 months with histologic assessment.