1. extensive scarring by multiple dermatologic procedures required for the many skin cancers of his scalp – field cancerization effect

Few years ago a scalp squamous cell carcinoma (SCCa) was treated with radiation.
Subsequently, a SCCa recurred in the radiated field and was treated with Mohs excision and closure. This was complicated by wound breakdown.

At that point, we treated the patient at SCARS for presumed hypoperfusion of tissue with temporoparietal fascio-cutaneous flap.

Despite initial success, this lead to progressive breakdown of the scalp and bone exposure over the next 18 months. 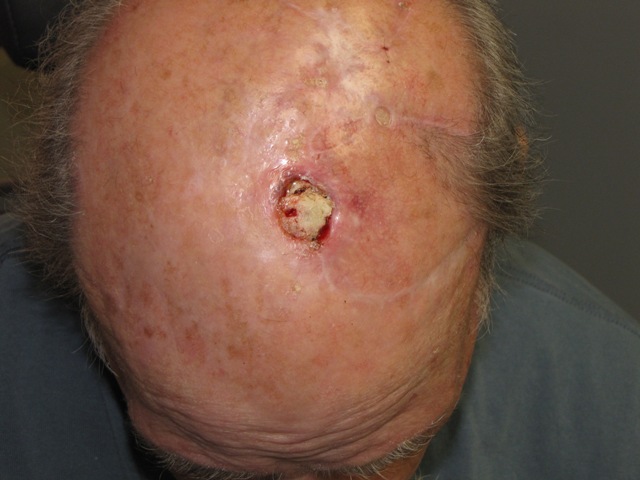 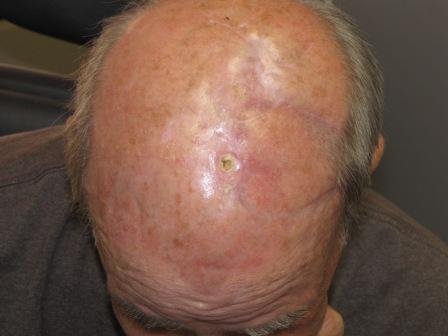 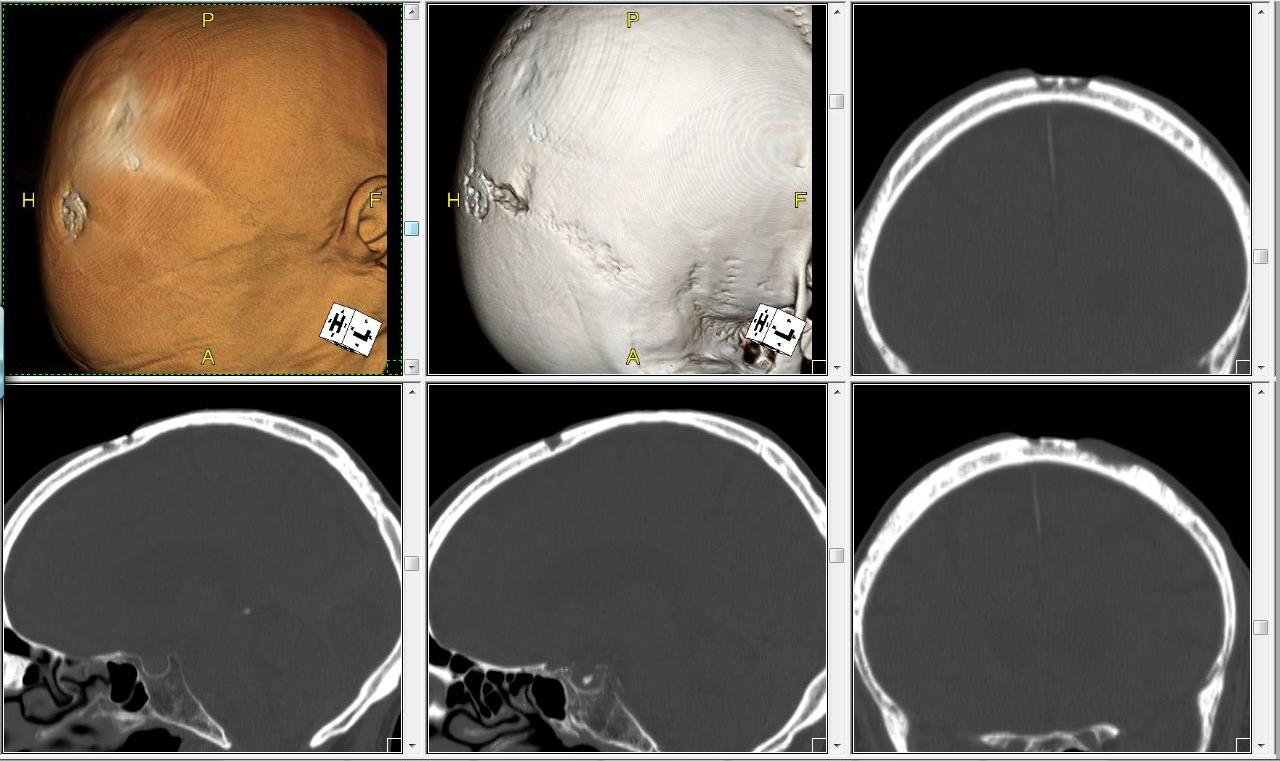 When surgery of a scalp carcinoma becomes a challenge and more risky, should the patient be treated with less invasive radiation therapy?

Is “The Perfect Storm” patient best relegated to radiation as was done in this patient?
The answer is a resounding “NO”. The same elements of the Perfect Storm that jeopardize the results of Mohs surgery and reconstruction also contribute to the risk of Radiation failure. Scarring, vascular disease, smoking all lead to hypoperfusion of tissues. Hypoperfusion leads to decreased metabolic activity of cancer cells, which results in resistance to radiation. Radiation induces inflammation and fibrosis further worsening the perfusion in marginal tissues. This can be minimized by decreasing the radiation fraction and spreading the total dose over 6 weeks. But in many cases even that is inadequate.  Adding adjuvant chemotherapy to sensitize cancers to radiation also improves the success of treatment. Except that we are dealing with a “Perfect Storm” patient with medical problems in whom chemo toxicity would add significant morbidity. 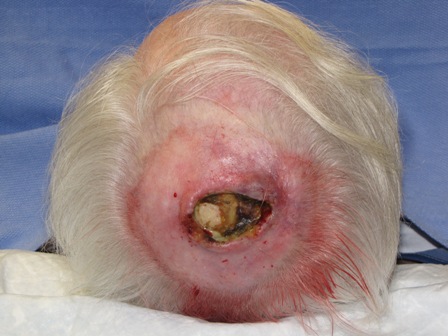 This is the patient with the highest risk of Mohs failure and complications from reconstruction. Mohs failure in these cases is due to a field cancerization effect (extensive precancerous cells and early cancers throughout the sun-damaged scalp). It is also caused by multiple scars of previous excisions and reconstructions where cancer cells can spread in a non-contiguous pattern. This makes Mohs excision impractical.

Reconstructive failure is due to poor tissue quality and hypoperfusion making reconstruction prone to breakdown. Poor health of the patient further places him at risk of anesthetic complications.

So is this “Perfect Storm” patient the perfect candidate for radiation?

Scalp poses an additional risk for radiation failure by its anatomic nature – it rests upon a relatively avascular periosteum. Two factors become significant – the depth of cancer invasion and the diameter of the treatment field. Deeply invading cancer results in a full thickness slough and devascularization of the center.  The diameter of the treatment field progressively devascularizes from the periphery of the field to the center – the greater the diameter, the greater the center’s devascularization. Unlike other anatomic locations, the scalp lacks perfusion from the calvarial bone below. Loss of perfusion in the center, progressive worsening of perfusion from periphery toward the center of treatment field, and lack of blood supply from below – all contribute to metabolic hibernation and radiation resistance of cancer cells. This is dramatically illustrated in another case where shortly after completion of radiation the cancer growth recurred with a vengeance at the ulcer edge – the area of greatest hypoxia at time of radiation. 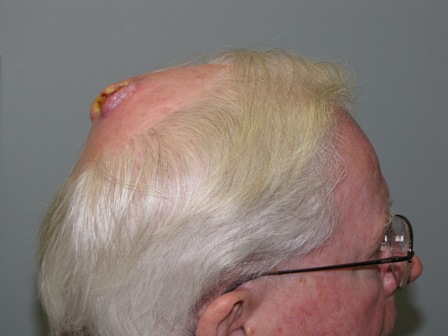 So, it follows that the most complicated scalp cancers are at peril of radiation complications. These perils include wound breakdown, calvarial osteoradionecrosis and osteomyelitis, and cancer recurrence.

Then what is the treatment of choice for complicated scalp carcinomas?

Look for our next article on the options of calvarial treatment and reconstruction.