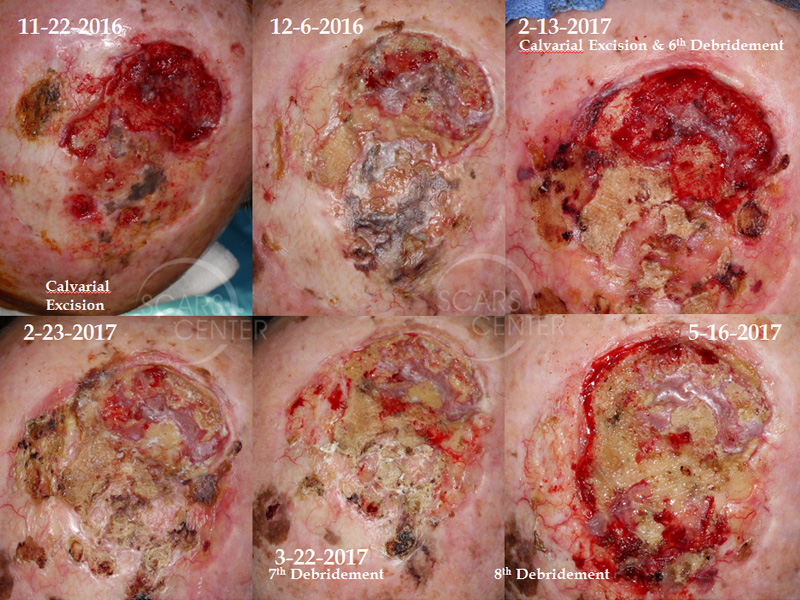 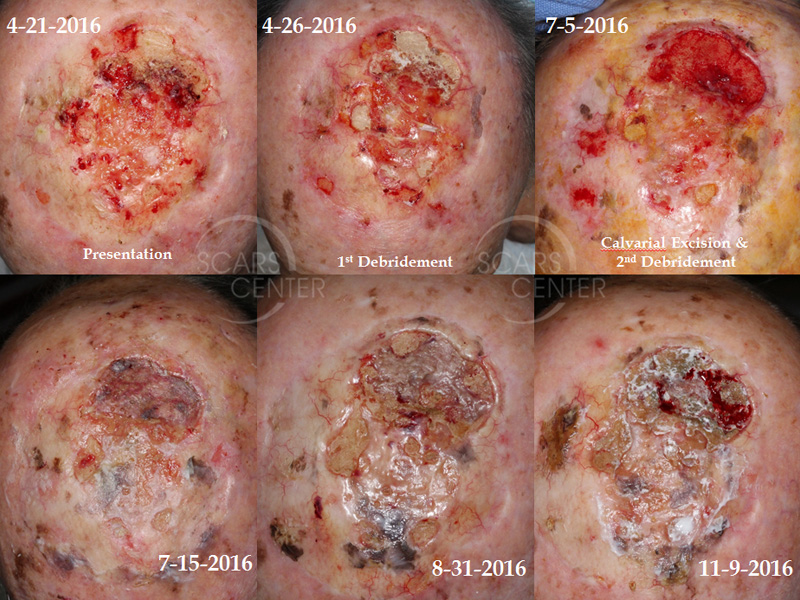 85-year-old man presented in 4/2016 with a 4 month history of a nonhealing scalp wound following excision of melanoma, radiation, and two failed skin grafts.

Patient had a consultation with UCI team for full thickness calvarial resection and microvascular reconstruction. The patient chose to pursue a conservative and gradual strategy of serial debridements.

In this month’s conference we presented a man who developed osteoradionecrosis after radiation of scalp vertex previously covered with the skin graft. In such setting of already poorly perfused tissue, radiation treatment will inevitably result in skin ischemia and subsequent bone ischemia. Treatment of osteoradionecrosis of the calvarium is interesting in that it can be done with a radical approach or a very simple conservative approach. The radical approach of calvarial osteoradionecrosis treatment includes full-thickness calvarial resection and reconstruction with the microvascular free tissue transfer such as radial forearm free flap or latissimus free flap. However, most of the time, the treatment of chronically exposed calvarial bone is done with expectant management and conservative serial bone debridement.

Soft tissue coverage of the exposed dead calvarial bone is not possible. Flap closure will result an infection underneath the flap with eventual bone re-exposure.

With more penetrating radiation damage, full-thickness of the calvarium could be ischemic, as is the case in our patient. The purpose of progressive gradual intervention such as bone debridement is to prevent pus collection within the diploic space or underneath ischemic bone. The bone will “declare” itself one small fragment at a time, and it could be simply flaked off with forceps. Rongeurs or osteotomes occasionally are used to perform conservative debridement of the bone in an operating room setting. Full-thickness debridement can gradually occur exposing the periosteum of the inner table of the calvarium. Below the periosteum lies the dura. The exposed periosteum will then readily granulate and epithelialize with good wound management.

In conclusion, calvarial osteoradionecrosis is best treated with patience, expectant management such as serial debridement, and careful observation for any intracranial exposure or symptoms.