Acceptance of residual melanoma-in-situ (lentigo maligna) after an excision can avoid cosmetic and functional deformation. Is the residual risk of recurrence and transformation into invasive melanoma low enough to warrant observation?

Melanoma-in-situ (MIS) is a high risk lesion due to three primary reasons. The first is that a partially biopsied melanocytic lesion with a diagnosis of MIS tends to be a heterogeneous melanocytic lesion with a risk of invasive melanoma in other parts of the lesion. The second reason is atypical melanocytes can extend several centimeters beyond the clinical lesion. This is what accounts for a recurrence rate between 5-30% depending on the length of follow-up. Finally, a melanoma-in-situ itself has a transformation rate of 5-30% into melanoma.

In view of this evidence, is deforming surgery a worthwhile endeavor particularly in older patients?

Tumor conference discussion of the risk of melanom-in-situ becoming an invasive melanoma revealed a wide range of opinion and proved to be controversial. Most dermatologists would treat these lesions aggressively with wide margin excision. Considerations of cosmesis with surgery would be secondary to the elimination of oncologic risk. Liability issues for many years after initial patient contact were cited as a reason for more aggressive management of these lesions. Patient cost was not viewed as a consideration for most physicians. However, most acknowledged that sharing the risk of recurrence or transformation into malignancy with the patient was an acceptable approach. This, of course, requires adequate explanation by the physician and demonstration of comprehension by the patient.

Aldara was discussed as an adjunct to an incompletely excised melanoma-in-situ. Although, high rate of histologic tumor clearance has been shown, long term follow-up of this treatment modality is still lacking.
Aldara for treatment of lentigo maligna

Dr. Matthew Goodman described a Mohs excision option for melanoma-in-situ with 2.5 mm margin and an additional 1mm resection for permanent histology. This would be utilized in cosmetically sensitive areas or in the setting of recurrent lesion.

Is the images below of a surgical outcome a worthwhile endeavor, or was this patient unnecessarily over treated? 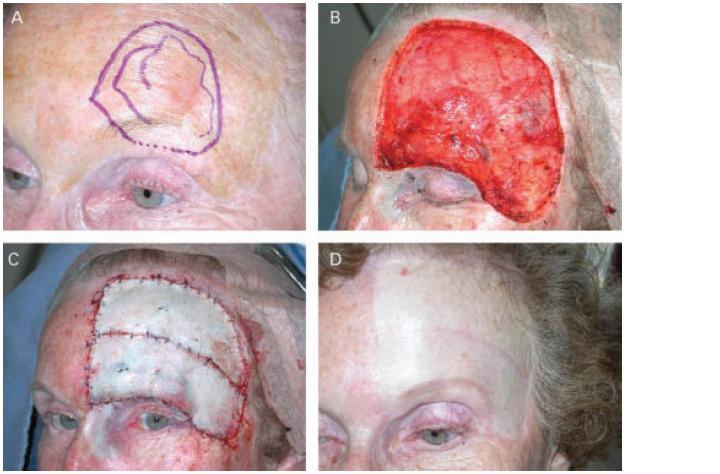 –Dr. Matthew Goodman on March 28, 2011:
This question of the treatment of lentigo maligna – ie melanoma in situ in chronically sun-damaged skin – is a chronic controversy. My general preference is to completely surgically remove the lesion if at all possible, since I believe that there is a high likelihood of eventual invasion and systemic spread if not removed. I prefer to use Mohs surgery to clear the margin, with less than 5 mm surgical margin, but almost always, after margins are clear with Mohs frozen sections, take an additional 1mm margin and submit for paraffin sections to assure margin clearance. It is rare that clear frozen margins are not accurate. In the case illustrated in this blog (not my case), it is a very large clinical lesion in the first place.

Therefore, the defect is quite large and the closure with skin graft is required. Is this a case of “overkill”? Should Aldara have been used instead? Was this lesion slow-growing enough that malignant transformation may not happened any time soon? Again, my opinion is that this lesion is a potentially fatal disease, left untreated or inadequately treated. Therefore, I still prefer the surgical approach. Aldara treatment allows no confirmation of complete eradication. Perhaps the patient would have preferred to take the risk of treating and observation, instead of the radical skin surgery that was done. Again, this is a challenging question, and each case requires careful consideration of all the options, and I believe, including the patient in the decision-making process.